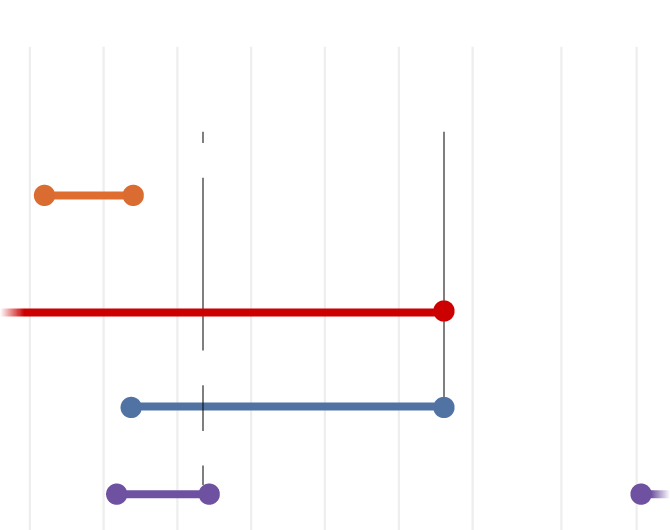 From the Trump rally to the violent breach of the Capitol and its aftermath, here is a moment-by-moment look at some of the pivotal events on Jan. 6, when thousands of protesters flooded the Capitol grounds and many rioters came within steps of members of Congress, who were gathered to certify the presidential election results.

Members of the Proud Boys, a far-right group, join protesters, who had been assembled on the Capitol lawn since 10 a.m.

President Trump begins speaking at a rally near the White House, about a mile away from the Capitol. 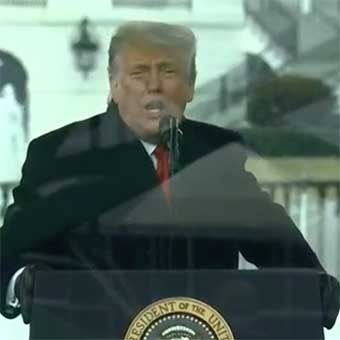 Mr. Trump tells rallygoers to walk down to the Capitol.

“After this, we’re going to walk down, and I’ll be there with you.”

A video shows a large crowd walking from the rally down Constitution Avenue to the Capitol. 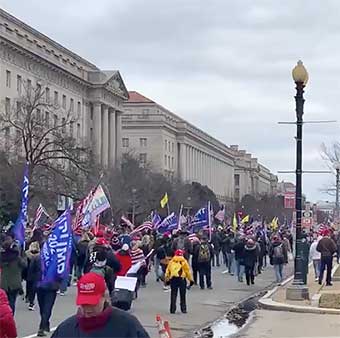 Rioters violently overwhelm the police and breach the Capitol’s outermost barricade. They break through three more barriers, forcing officers back to the Capitol steps, where they now face off. 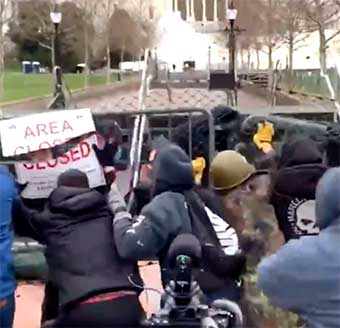 Capitol Police in riot gear are seen arriving to reinforce the line of officers on the Capitol steps.

Speaker Nancy Pelosi begins the joint session of Congress, where both chambers meet to certify the presidential vote. 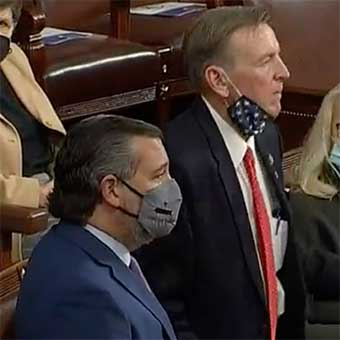 By the Capitol steps, rioters continue to clash with the police. By now, reinforcements from local police have arrived to help. Both sides spray chemical agents.

The Senate and House debates begin in their respective chambers.

Rioters make it past two barriers on the east side of the Capitol and can now approach the doors of the building.

Another mob breaches the final barricade on the building’s west side and approaches an entrance near the Senate chamber.

The first rioters make it inside the Capitol building. 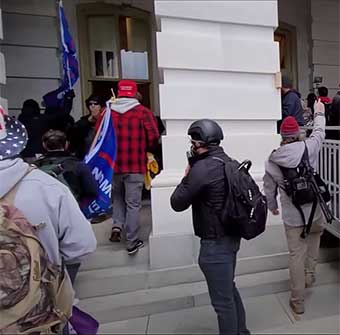 As Senators continue to debate, Vice President Mike Pence is ushered off the Senate floor.

Senator James Lankford, Republican of Oklahoma, is interrupted on the floor of the Senate, which is called into recess. A minute later, a mob arrives steps from a door to the Senate chamber.

In the House Chamber on the south side of the building, Ms. Pelosi is ushered off the floor. The debate in the House continues.

The House goes into recess, and representatives remain in the chamber.

Rioters breach a second entry into the building, this time on the east side. 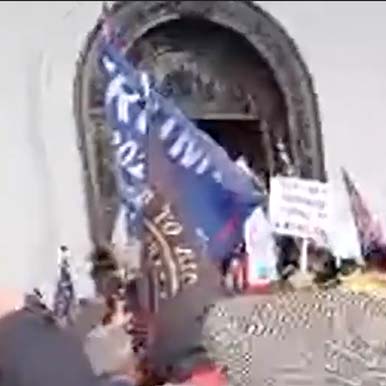 The House goes back into session, even with the mob in the building.

The House is called into a final recess. Someone yells, “Sit down!”

Senators are evacuated from the Senate chamber as House members remain in theirs. 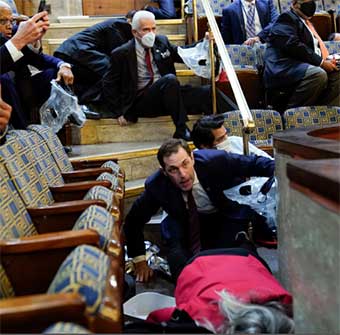 The first rioters reach a rear door of the House chamber, where members remain inside. Plainclothes officers train their guns on the door. 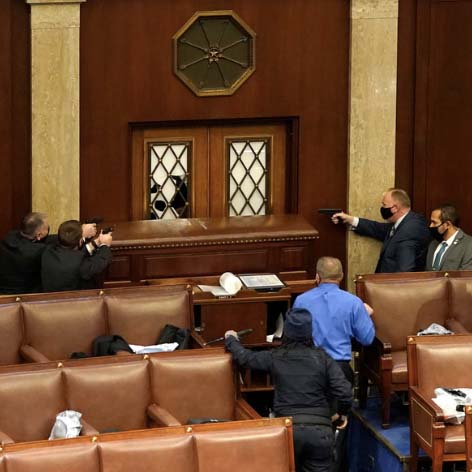 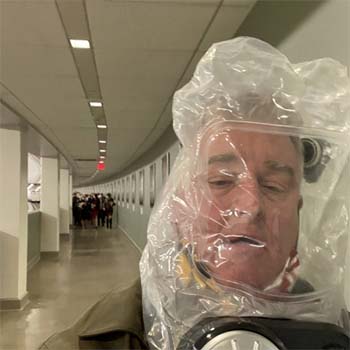 Rioters reach the doors of the Speaker’s Lobby.

Ashli Babbitt is shot and killed by an officer as she attempts to break into the Speaker’s Lobby. The last representatives are still being evacuated.

Rioters make it to the floor of the Senate chamber, where they are seen sitting at the dais and hanging from the balcony. 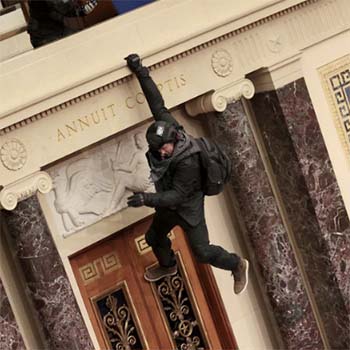 Bringing the Capitol Under Control

The D.C. National Guard is activated, but its members would not arrive at the Capitol for more than two hours.

Rioters now breach a third door at the building’s southeast side.

An F.B.I. SWAT team is seen at the building.

Mr. Trump tweets a video in which he tells his supporters at the Capitol that he loves them.

“It was a landslide election. And everyone knows it. Especially the other side. But you have to go home. … There’s never been a time like this when such a thing happened when they could take it away from all of us. From me, from you, from our country. This was a fraudulent election. … Go home. We love you. You’re very special.”

The sergeant-at-arms, who is responsible for the security of Congress, tells lawmakers and reporters that the Capitol is now secure. Meanwhile, members of Congress continue to shelter in largely undisclosed locations.

The D.C. National Guard arrives at the Capitol, swears in with the Capitol Police and begins support operations.

Curfew begins in Washington, D.C. Officers arrest many who defy the order.

In a tweet, Mr. Trump once again says that the election was stolen.

“These are the things and events that happen when a sacred landslide election victory is so unceremoniously & viciously stripped away from great patriots who have been badly & unfairly treated for so long. Go home with love & in peace. Remember this day forever!”

Capitol Police, local police and the National Guard establish a perimeter on the west side of the Capitol. 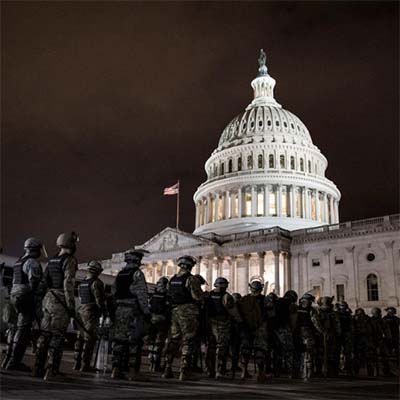 The Senate resumes debate over the certification of Arizona’s vote in the Senate chamber. The House would reconvene about an hour later.

With a citywide curfew in place and a heavy security presence outside the Capitol, lawmakers returned to their chambers and resumed debate late in the night, finally certifying the vote after 3 a.m. on Thursday.

Hours later, workers were seen installing a seven-foot fence surrounding the perimeter of the Capitol. By the weekend, said Ryan McCarthy, secretary of the Army, 6,200 members of the National Guard would deploy to the Washington, D.C., area in an effort to prevent similar breaches in the days leading up to Inauguration Day.

Costco to increase its minimum wage to $16 per hour, but CEO says the average pay for hourly workers is $24